A Cross Being Forcibly Removed From A Church In Shanghai

Most of the people groups still unreached by the Gospel live in places stretching across the maps of Northern Africa and Asia.

Christian missions strategist, Luis Bush started calling this rectangular area or band: “The 10/40 Window.” The people who live in these countries are not more important to God than people in other parts of the world when it comes to the need to be saved by God’s Grace. The issue is not need – as all men need the Gospel. The issue is opportunity to hear the Gospel.

Lost people in America, for instance, are just as much in need of salvation as people in Myanmar. The reason we are focusing on the 10/40 Window is that we want to give all people an opportunity to have access to the Good News of Jesus Christ and His salvation. We focus on countries that have limited access to the message of salvation. Consider these statistics:

• Center of population: Two-thirds of the world’s population — more than 4.4 billion people — live in the 10/40 Window.

• Poverty: Eighty-five percent of those living in the 10/40 Window are the poorest of the world’s poor.

• World religions: Islam, Buddhism and Hinduism are centered within the 10/40 Window. 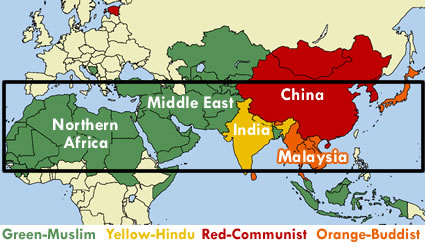